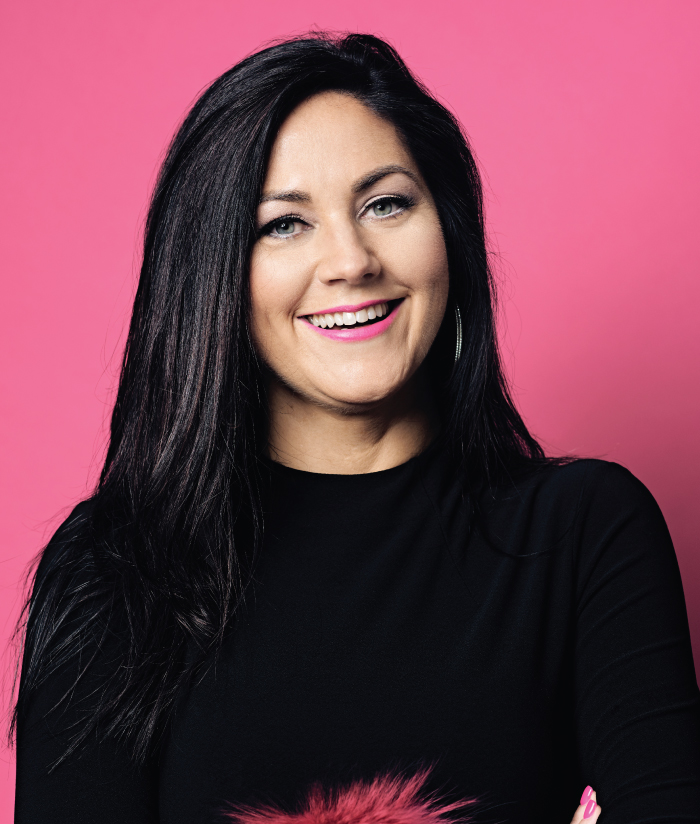 Cindy Eckert is a highly regarded entrepreneur, a strong advocate for female entrepreneurship, a pharmaceutical leader and one of the few women to have ever sold a company for a billion dollars. The New York Times called her pharmaceutical product the “drug of a generation” and Fortune called her a “tireless force of nature.” Associates of hers call her unapologetically pink.

Over a distinguished 24-year career in healthcare, she started and sold two businesses for more than $1.5 billion. Having co-founded and sold Slate Pharmaceuticals, which redefined long lasting testosterone treatment for men, she launched Sprout Pharmaceuticals immediately thereafter. As Co-Founder & CEO of Sprout, the company broke through with the first ever FDA-approved drug for low sexual desire in women named Addyi — dubbed “female Viagra” by the media. In 2015, Cindy sold the company to Valeant Pharmaceuticals for $1b cash.  Everyone that was a part of the original Slate team was gifted shares in Sprout.

Shortly after the sale, Valeant became the subject of media scrutiny for the rampant price inflation of their drugs and an SEC investigation related to accounting practices. Not one to sit idly by, Cindy negotiated to reacquire Addyi at no cost, in order to properly launch it into marketplace on her own terms. Not only did she reacquire the drug, she also secured a $25m loan from Valeant to fund initial operating expenses.

Today, Cindy is focused on mentoring, investing in, launching and building other women-led or focused businesses. In 2016, she opened the doors to The Pink Ceiling — a cross between a VC firm, a ‘pinkubator,’ and a consulting enterprise — where she is CEO.  At The Pink Ceiling, she has personally invested $15m across 10 different health tech companies at various stages of development.

Cindy’s work has been featured in countless major publications including The New York Times, Fast Company, Financial Times, Vanity Fair, Bloomberg, CNBC, CBS, Fox, Yahoo and on the cover feature of Entrepreneur Magazine. Cindy has been an invited speaker at Fortune’s Most Powerful Women, the Fast Company Innovation Festival, Ad Week, Inc. Magazine, and many more. She is on a mission to speak to as many women as possible about what it takes to achieve breakthrough business success. It’s no surprise that JJ Ramberg, the host of MSNBC’s Your Business says that “Cindy is one of our favorite guests. Though she has reached a level of success as a founder that most can only dream of, she is incredibly relatable and honest about what it takes to run a business.  She offers the perfect combination of inspiration and advice and it’s hard to come away from listening to Cindy speak without wanting to hear more.”

"Cindy Eckert is an inspirational speaker. Her stories as a female founder about why women should be unapologetic in business are always in the back of my mind as a female entrepreneur! Cindy is a true boss lady!"
- Brittany Lehman,Manager, Partnerships & Community, Business Rockstars
“When I look back at Cosmopolitan’s marquee event this year, one of the highlights was having Cindy Eckert there. As the world’s biggest media brand for young women, we work tirelessly to make sure that our live events feature only the smartest, most interesting, dynamic and groundbreaking speakers and Cindy certainly fit that bill!…Cindy’s words about starting a business and advocating for oneself really resonated with our attendees. She’s funny, smart, engaging and gives both practical and inspirational advice with style!”
- Laura Brounstein,Editorial & Business Development Director, Cosmopolitan and Seventeen
"Cindy Eckert is a brilliant, irreverent and passionate advocate for women who speak practically and frankly about the issues that matter most. Her "been there - done that" story is quite an awe inspiring and a slap in the face to those who find comfort in the status quo. All I can say is: Take notes people!"
- Blake Irving,CEO of GoDaddy
“Cindy was an engaging and dynamic speaker at our event. She is personable, charismatic, and powerful. We were fortunate to kick things off with Cindy’s keynote, and from start to finish our attendees were encapsulated. Cindy created an electric environment that set the tone for a successful day of programming. We could not speak more highly of Cindy and look forward to featuring her at future events!”
- Dylan,Co-Founder, Next Gen Summit
“Brace yourselves. When Cindy Eckert takes the stage, she’s fully prepared to do two things: Drop insider knowledge (while spilling just the right amount of tea), and offer the kinds of indispensable insight that can help anyone move into a market with confidence…Cindy believes in the power of women to shape the business world in ways that improve the lives of everyone. And when she’s done talking, so will you.”
– Ellen McGirt,Senior Editor, Fortune Magazine
“Cindy is an inspirational speaker who marries head with heart. She is a wealth of knowledge who uses empathy and candidness to connect with her audience. We loved having her in the Girls’ Lounge, and would recommend her for any speaking event, big or small.”
- Shelley Zalis,CEO, The Female Quotient
“Having Cindy Eckert as our 2017 Mentoring Monday keynote speaker was a wonderful way to kick off this event. Cindy’s success story is so inspirational to all women but especially meaningful for this group of local young women seeking advice and direction in their career endeavors. As evidenced by the audience questions to Cindy, we could have made a day of just her story and advice. Maybe next time we will!”
– Caroline Saleeby,Bizjournals
“Cindy’s success story is fascinating! Her passion for serving and her innovative way of thinking immediately captured our attention. She has a genuine way of being that allowed us to enter into her world. She left us inspired to deliver on our own “big idea” solutions.”
- Pam Williams,Immediate Past President, NAWBO
“Cindy was an amazing speaker and truly packed the C-Suite Perspectives with happy attendees. Our attendees left Inspired from her Professional and Personal Leadership lessons. Cindy is a natural leader who exemplifies wonderful characteristics and leadership.”
- Brianne Gill,Raleigh Chamber of Commerce
Previous
Next