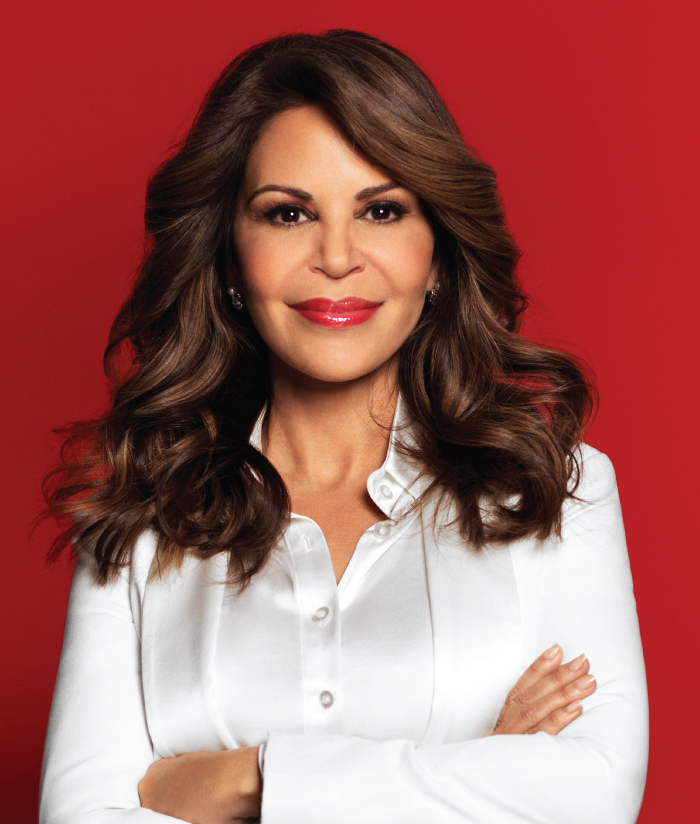 Latina media dynamo and women’s empowerment advocate Nely Galán, dubbed the “Tropical Tycoon” by The New York Times Magazine, is one of the entertainment industry’s savviest firebrand talents.  An immigrant and self-made media mogul, Galán was the first Latina President of Entertainment for a U.S. television network (Telemundo). She is an Emmy Award-winning producer of over 700 episodes of television in Spanish and English, including the FOX hit reality series “The Swan.”

After becoming self-made on her own terms, Galán started a Non-Profit Organization, The Adalante Movement (“Move it forward!” in Spanish), which seeks to train and empower Latinas to become entrepreneurs. Soon, not just Latinas, but women of all backgrounds began showing up to her events, a clear signal to Galán that all women, and particularly multi-cultural women, were leading a new economic women’s movement. Indeed, she started a movement which turned into four years on the road speaking and inspiring audiences around the country. During that time, Galan decidedly made it her mission to teach women specifically—regardless of age or background—how they too can become entrepreneurs. Latinas in America control $3,000,000,000,000.00 in purchasing power. Yet they remain a marginalized community. Galan wrote her latest book, SELF MADE: Becoming Empowered, Self-Reliant, and Rich in Every Way (Spiegel & Grau/Random House, 2016) as a manifesto to ignite the SELF MADE movement, uniting all women on a quest for an economic future they control. The book becomes an instant New York Times Best Seller, was translated into various languages and sold all around the world.

Galán is the former President of Entertainment of the powerhouse Telemundo television network, making her the first Latina president at a major network. She has owned and operated her own media company since 1994. Galán Entertainment has helped launch 10 groundbreaking television channels in Latin America and has also produced 700 episodes of programming that cross all genres, from reality series to sitcoms, telenovelas to talk shows, in both English and Spanish. In addition, Galán is the founder and president of Santa Clara LLC, a real estate development and investment company that has commercial and residential real estate holdings in multiple states.

In 2008, Galán appeared on the first season of the NBC hit The Celebrity Apprentice with Donald Trump. Galán’s appearance on the show, where she raised $250,000 for her charity Count Me In for women entrepreneurship, cemented her reputation as one of the nation’s top female leaders.

Galán is a sought-after speaker on the subject of women entrepreneurs, and the role of diversity in the US economy. She has spoken at Coca-Cola, American Express, General Electric, the US Chamber of Commerce, the Gates Foundation, the Clinton Foundation, and the United Nations.

"Nely is a fantastic storyteller! She has a phenomenal ability to compel an entire room to not only listen, but to feel, which is critical to making a memorable impact. Her examples were funny and familiar; her tips - progressive and practical. We are so grateful we asked Nely to close our biggest day of the conference. She not only delivered useful content, but she also left us all with a gift we won’t soon forget!"
- Network of Executive Women Leadership Summit
"Nely Galan was awesome. She was SO nice upon arrival. My colleague Laura and I will not forget how special she made us feel from the walk from the car to the green room. Once she was on stage, WOW! She had great energy and her message resonated with attendees in the room. Afterwards, she had a line of people who really wanted to have a conversation and take a photo with her. Even walking her back through the pre-function space, attendees would stop her and she kindly had this moment with them. Lots of positivity surrounding her."
– Kaiser Permanente
Previous
Next