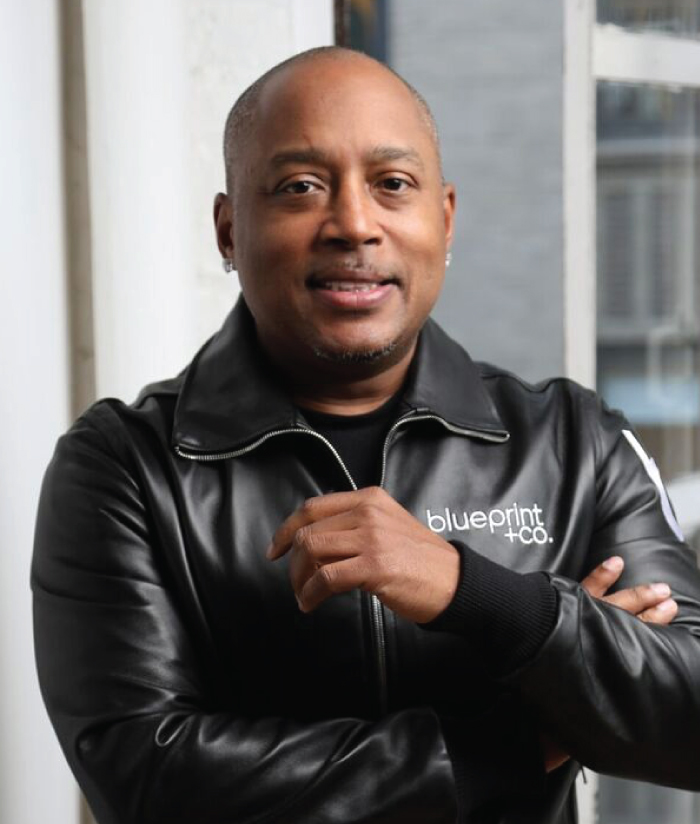 Founder/CEO of FUBU, Presidential Ambassador for Global Entrepreneurship, Star of ABC's Shark Tank, and CEO of The Shark Group

From his wildly successful role on ABC’s smash hit, Shark Tank, to his distinguished status as a Presidential Ambassador for Global Entrepreneurship, Daymond John has become globally recognized for his relentless commitment to promoting and supporting entrepreneurs.

Daymond initially made his mark as the entrepreneur and branding expert behind the groundbreaking lifestyle brand, FUBU, which eclipsed more than $6 billion in global retail sales. From the streets of Hollis, Queens, Daymond started a global movement from the basement of his mother’s house by capitalizing on the then fledgling hip-hop culture. Today, the streetwear market that FUBU pioneered is a $20 billion dollar industry.

Since then, Daymond has continued to challenge himself and the business world in which he operates. In 2009, Daymond was tapped by lauded television producer, Mark Burnett, to join the cast of a new business-reality concept, Shark Tank. After 8 seasons, 4 Emmy Awards, multiple Critic’s Choice Awards and millions of dollars in investments, the show has become the most watched program on Friday nights, and one of the most successful business reality series of all time. Over the course of the series, Daymond has been a mainstay of the cast of Sharks and is now affectionately referred to as, “The People’s Shark.” Season 9 will begin shooting in June of 2017.

Resolved to expand his own brand, Daymond has written three books, the most recent of which debuted at #2 on the New York Times Best-Seller list in January of 2016. The wildly successful release, The Power of Broke (Crown Publishing) takes an in depth look at how successful entrepreneurs who started from broke were forced to think more creatively and to leverage their resources more efficiently, than their counterparts. While his previous books, Display of Power and The Brand Within were national best-sellers, The Power of Broke stands as the only New York Times best-selling book from any of the Sharks.

Beyond the brands, the television series and the books, Daymond’s commitment to entrepreneurship has been celebrated on a global level.  In 2015, he was named a Presidential Ambassador for Global Entrepreneurship and was part of an exclusive group who joined President Obama at the Global Entrepreneur Summit in Kenya. In March, Daymond accompanied The President on his historic trip to Cuba, which represented the first time a sitting US president visited the island since Calvin Coolidge did in 1928.

One of Daymond’s greatest accomplishments is his continued fight against dyslexia. He has worked with the Yale Center for Dyslexia and he currently sits on the advisory board of Understood.org. Daymond has embraced his affliction allowing it to be a catalyst for his career as a highly sought after public speaker and author.

As a dynamic speaker with more than twenty-five years of proven business experience, Daymond has become one of the most highly sought after speakers in the country. He regularly speaks at Fortune 100 companies, conferences, universities, and independent businesses alike. Daymond’s high energy presentations give audiences relatable advice and practical takeaways. His S.H.A.R.K. Points are actionable principles that bring long term results. Entrepreneurship, marketing and branding, financial literacy and goal-setting are among his most popular topics. Daymond has delivered keynote speeches for organizations such as General Mills, Johnson & Johnson, Samsung, AT&T and dozens more.

A recipient of more than thirty-five awards, including the Brandweek Marketer of the Year and Ernst & Young’s Master Entrepreneur of the Year, Daymond serves as CEO of the brand consultancy, The Shark Group, which specializes in brand strategy and development, artist relations and talent development. Under Daymond’s leadership, The Shark Group has re-written the script on how companies, brands and products can seamlessly work together to yield a sum greater than its parts. The Shark Group works with a wide range of businesses and brands, including Capital One, HSN, Forbes, Miller Lite, Gillette, Shopify and Infusionsoft and superstars such as Muhammad Ali, the Kardashians, Pitbull, Stan Lee, Carlos Santana, Jillian Michaels and others.

“Daymond’s keynote was a huge hit, as evidenced by the enthusiastic scores he got in our attendee survey, and I truly appreciate all of you and he did to help make the three days a huge success”
- Eric Schurenberg,President and Editor-in-Chief of Inc. Media
“Daymond John’s Keynote at the MGM Grand in Detroit was a Tour de Force theatrical performance of style and flair. His mix of “keepin’ it real stories, lessons, music, and home pictures made you laugh, cry and think.”
– George Fraser,Founder and CEO, FraserNet, Inc.
Previous
Next